Thursday, August 15th, during the 6:00 PM Town Band concert on the Green in South Royalton,Vermont State Architectural Historian,
Devin Colman, will lead a walking tour of the four, possibly five,
nationally significant buildings in the village of South Royalton. These
prominent buildings were designed by architect George Guernsey in the
1880s and 1890s. The use of wood shingles, clapboards, beaded boards,
bricks and terracotta give the buildings intricacy and visual variety.
Colman will describe the architectural features on these buildings and
why they have national significance. Janet Hayward Burnham, editor
of the Bethel Historical Society’s book Vermont’s Elusive Architect,
George H. Guernsey will have copies of the book available.

Denny Ferguson, President of the Joseph Smith Birthplace Memorial
Historic Site, and his wife Marcene, will be at the Royalton Academy
Building in Royalton village on Saturday, August 17th from 1-5 PM
conducting workshops on family genealogy. The Fergusons will work
with anyone interested in building a family tree using the Church of Jesus
Christ of Latter-day Saints free computer service. The program,
FamilySearch.org, is a great source for families to preserve family
photos and stories.

There will be a great variety of activities going on in Royalton village
throughout the afternoon on Saturday as part of Royalton’s Old Home Days.
The First Congregational Church will be offering historic building tours and
will be serving light food. Marilyn Polson will play, in the First Congregational
Church, the historic 1882 George Ryder tracker pipe organ and the
Mason & Hamlin reed organ. On a rotating schedule Polson will play in the
former St. Paul’s Episcopal Church one of the oldest organs in Vermont: the
small 1836 tracker-action pipe organ made by William Nutting, Jr. of
Randolph Center.

Tyler Strong, Director of the Royalton Memorial Library, will be showing
in the former St. Paul’s Episcopal Church, films made in Royalton. The
library will also have a small book sale.

The Royalton Historical Society will have its museum in the Royalton Town
House open and Sue Cain will demonstrate various methods of spinning wool
and flax and show examples of historic weaving. At 2:00 PM in the Royalton
Academy Building Jeanne Brink will speak on Vermont’s Abenaki heritage and
how the various Indian tribes live in Vermont today.

All events and programs are open to the public and most are accessible for people with disabilities.

We are excited and hope that you are too!!  Old Home Days is just around the corner.

If you have an antique tractor, interesting car, marching band, or just plain like attention, do come and join our parade.  It is being held at 10 am on Saturday August 17th and the theme is.....HAPPY BIRTHDAY.  (It is our 250th by the way..) 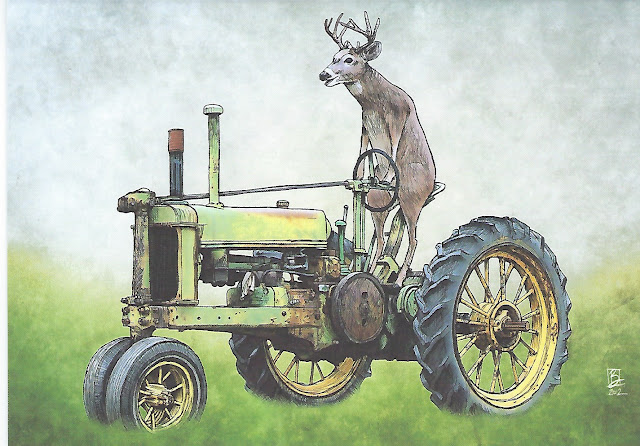 Artwork by illustrator Shawn Braley will be on sale during our event!  www.shawnbraley.com
Posted by Royalton 250 at 12:12 PM No comments:

The First Congregational Church of Royalton will be fundraising on Saturday August 17 from 1-4 pm by arranging a self guided walking tour of the Historic Royalton Common.

Come and learn the fascinating history of our Town while getting to view some of the beautifully restored homes of our original settlers. 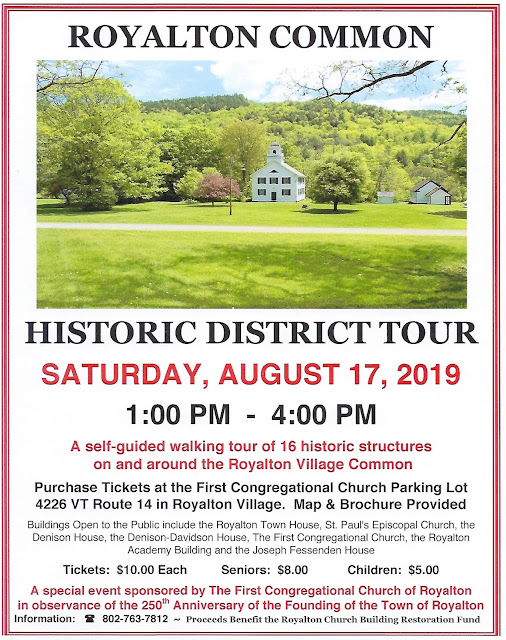 Well we tried to hang the bridge banner on Sunday announcing Old Home Days.
After an hour in the air, Paul finally got things squared away in the wind. 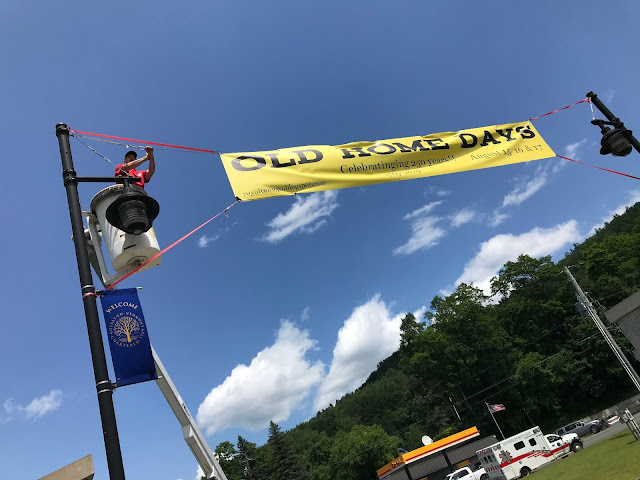 One Problem-- The wind got the best of it in about 2 hours.

We've gone back to the drawing board and will attempt the banner hanging this week.  Fingers crossed!!

Calling all PARADE lovers!  We want our parade to be bigger than ever as we celebrate our 250th birthday in style.  The theme is.......you guessed it, "Happy Birthday!"

Forms are available at the Royalton Town Office or contact Carol Green, Parade Marshall, at VTLION@gmail.com

All are invited to be part of our historic celebration! 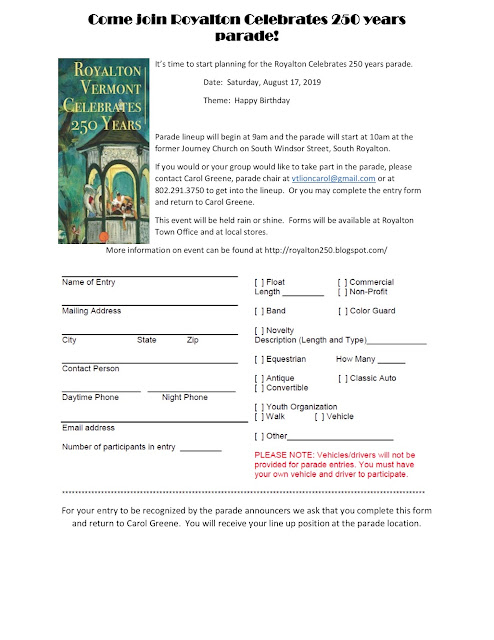 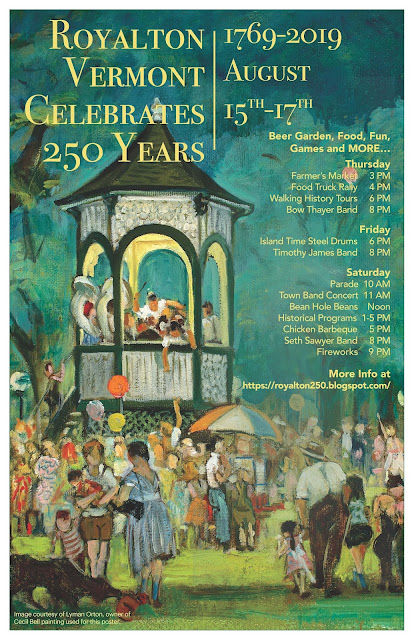 Posted by Pam Levasseur at 11:17 PM No comments:

Getting ready to celebrate

The summer is fast approaching and we are busy putting together a fantastic schedule of events.  Take a moment to look at the updated schedule on the events page.  We are also actively taking on sponsors so if you, or your organization, are interested please contact us sacacsg@yahoo.com

We are especially excited to announce that Royalton High School alumnus and successful illustrator, Shawn Braley, has generously donated our official celebration design!  Thank you Shawn! 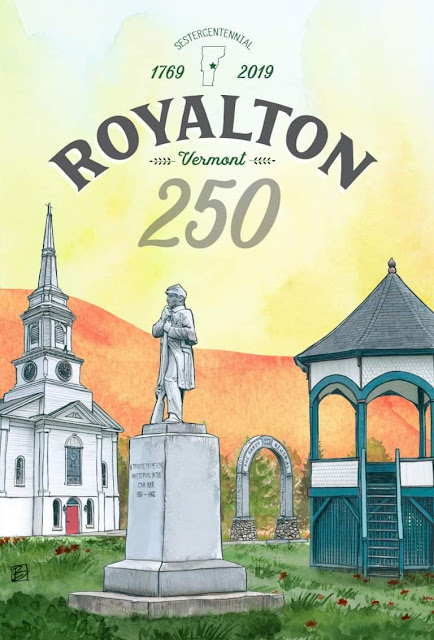